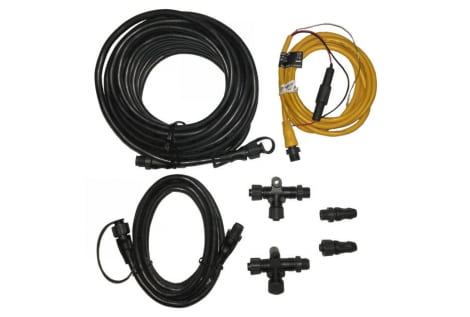 NMEA2000 is the solution that allows you to create networks of instruments on board boats, making them able to operate with each other and ensuring the highest standards of reliability in the industry. Manufacturers of marine electronics, echo sounders, radar, GPS and engines have, not surprisingly, chosen to update their old proprietary protocols and began to make available tools with NMEA2000 certification. The NMEA – acronym that indicates the National Marine Electronics Association – is a non-profit organization with more than 500 members worldwide. Its mission is to promote navigation and above all to improve the organization of operational safety. How so? First of all with the development of industry standards and their maintenance over time, but also through technical training. Not only producers in the sector, but also operators, public organizations, private and distributors cooperate in this task, in the service of the public interest.

NMEA2000, therefore, is not the name of a company or even a product: it is, instead, a communication protocol by virtue of which any certified product can be connected to a data cable, that is, a bus, so as to be able to communicate and dialogue with other instruments. The first NMEA2000 certified products date back to 2004, while at present the protocol enjoys the recognition of the Society of Automotive Engineers, the SAE, as a standard for marine data communication. The standard is plug and play, in the sense that once the connection is made there is no need for additional configurations.

NMEA2000 is a guarantee of reliability and safety of certified products. One of its strengths must be identified in the open architecture, from which derives a full and fast interoperability between the motors, sensors and instruments: a goal that had never been achieved before. The development of this standard is the result of a collaborative work that has seen the involvement of many operators in the field of marine electronics and began in the second half of the nineties. More than ten companies took part, including Airmar Japan Radio Corporation, Metal Marine, Simrad and Furuno.

How does that work

NMEA2000 ensures the networking of communication GPS, engines, monitors, alarms and a nautical flow meter for consumption and much more, which in this way can be controlled on a single system. In the case of proprietary standards, the limits are obvious because you are forced to refer to only one brand. This problem does not arise with NMEA2000, which has the advantage of connecting products of different brands, united in a single language. In addition, NMEA2000 has a single bus, which leads to a decrease in the number of cables required. The consequences are easy to guess, both in terms of cost reduction and from the point of view of on-board installations, which are simplified. And the same goes for subsequent changes.

The advantages from the point of view of navigation

For navigation, the benefits are many, because on board your boat you have the opportunity to access, on any instrument and at any point, any critical data relating to sensors and equipment. With the touch of a finger you can discover, from a single monitor, information about sensors, GPS, motors, and so on. Regardless of the size of the boats, the NMEA2000 network always guarantees important results. it is a Controller Area Network that is based on a bidirectional digital protocol developed in the automotive sector. All marine applications can benefit from this solution, both for its robustness and for its efficiency.

Improvements over the past

Before NMEA2000, the reference standard was NMEA0183. It had the defect of being based on point-to-point connections: in other words, it was necessary that the various devices were connected to each other one by one. This problem does not arise with NMEA2000, precisely because multiple connections are now supported that connect the various devices through a single network: the instruments, thus, transmit data over the network and read them quickly. Also for this reason the NMEA2000 networks are able to guarantee top performance in the marine environment: it is a convenient and easy to install solution that can be used for sharing information. While text messages were used with the NMEA0183 protocol, now it relies on binary messages.

All the advantages of the new protocol

You no longer need to set up data transfer rates and no longer need to select communication ports. In addition, there is no need to connect the wires one by one; you just have to worry about connecting the instruments and sensors, which at that point will be detected instantly in the network. Networks that integrate NMEA2000 devices can accommodate sensors and instruments from different manufacturers, united by standard watertight connectors. When the networks are even more widespread, then, there will be a sharp reduction in prices. As a result of a standardized system such as the one that is made available by NMEA2000, we are dealing with a proven and robust system of cable connections: this makes the installation procedure of the instruments more streamlined, and possibly even their removal.

The power supply of the bus is an interesting aspect as it makes it possible to connect the stand-alone sensors directly to the network. Temperature sensors, GPS sensors, fuel level sensors and depth sensors can all be connected to a single bus using the power available in the network, even on very small boats.

Chat with us on WhatsApp