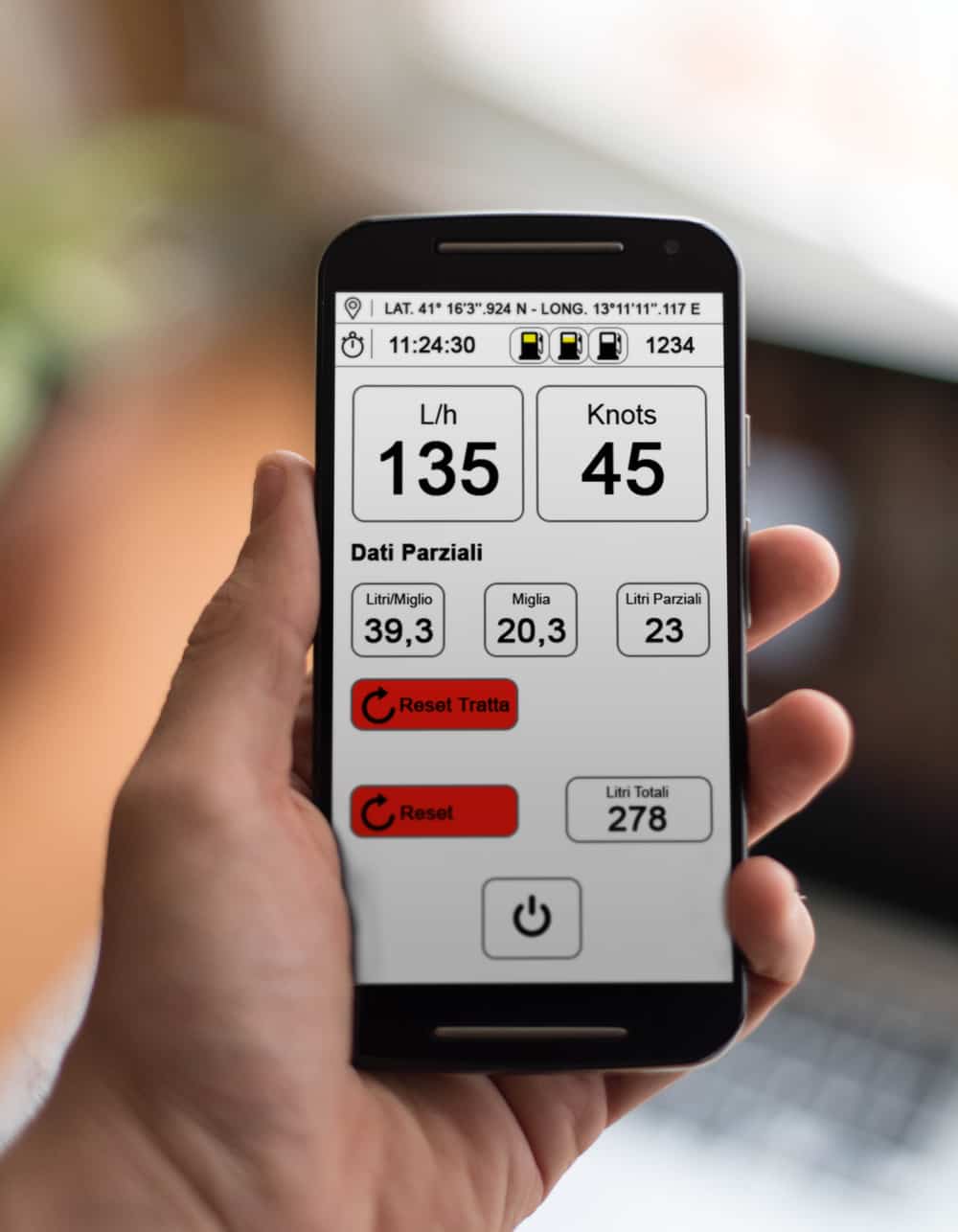 Stop improvised calculations, often wrong and inaccurate, enough flying sheets and mathematical formulas used badly and randomly. With the system and the NaviFlow App it is sufficient to enter the correct data, without any difficulty and need for a degree in computer science, to have the instant consumption of a boat with a single engine or with twin-engine, diesel or gasoline. With a few clicks you eliminate the anxiety of autonomy and you have a precise estimate of consumption and then navigation costs. NaviFlow is available for both IOS and Android

What do I need to install the system?

Simply power the control unit NaviFlow to the power supply (12 or 24 V), connect the flow meter to the fuel pipe and download the App NaviFlow. The tutorial summarizes and illustrates the installation in a few steps (at the following link)

A stable connection via Bluetooth

The connection is ensured by  Bluetooth Low Energy, different from Bluetooth, known as BLE. Always a wireless technology, but it guarantees lower energy consumption, as well as a reduced cost, essential for those who surf and may not have a charging socket available. The security of keeping fuel consumption under control goes hand in hand with the guarantee of having the autonomy of connection, without losing quality in data transfer.

The requirements and differences with the Bluetooth connection protocol: the need for low power to be activated and remain active, a reduced cost and compatibility with most devices: mobile phones, tablets and PCs. The Navi Flow Application offers version 4.1 adopted for applications such as home automation and ideal for boating. Complex operations with little power.>

Ease of use and real-time consumption

The App is intuitive and you dribble the pairing, you do not need to pair the device since it takes place via App and not via operating system. All automatically and in real time. NaviFlow, in fact, makes a direct calculation based on the actual circulation of fuel, quantity detected by the flow meter and the data are communicated to the smartphone with the BLE protocol. A direct and constant control.

The configuration is very simple. Once the App is launched, the home screen appears where the available control units are shown. A moment and you connect, rename the control unit (with the name of the boat) and enter the password (last four digits of the serial shown on the control unit and on the box).

The consumption history (liters used and tank residue) is saved in memory. So even if the control unit will be turned off at the next start the App will show the old values

This data will always remain in memory until the reset by the user, which can also take place once a year.

A very convenient feature offered by the NaviFlow App is the history. One click and you see all the routes saved in the memory that you can easily view on Google Maps. You have, in an instant, all the information: duration of navigation with departure and arrival, miles traveled and the cost of fuel consumed. Five pieces of information in four lines. The configuration is simple just enter the price of fuel and the volume of the tank in liters. Simple data that make it intuitive to read  the screen that presents itself with a friendly appearance and high usability. Within everyone's reach.

If the boat is equipped with a twin-engine engine, the (separate) icons of the two engines appear with the parameters of instantaneous consumption in liters / hour depending on the speed expressed in knots. The consultation can be in landscape, you can rotate the screen of the mobile for optimal viewing.

The App is free, but by subscribing to a subscription (monthly or annual) you can have additional functions:

The subscription to the App costs about 49 euros per year or about 19 euros per month. An expense whose cost is amortized thanks to the savings obtained from the optimization of consumption. Not to mention the tranquility and serenity of being able to control unexpected and unexpected consumption and thus avoid unpleasant situations.

Chat with us on WhatsApp